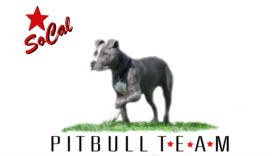 He was nominated because of his tireless work and positive attitude as a key volunteer at the Humane Society of Imperial Valley in El Centro, where he washed and walked dogs, cleaned, and made a huge impact even on the adults that were there volunteering alongside him.

He lives in San Diego with his parents Howard and Kristina, and his Labrador retriever, Soliel.  His mom is the RN Educator at Rady's Children's Hospital Hemotology/Oncology Clinic.

In January 2016 SoCal Pitbull TEAM announced our first recipient of the Young Animal Advocate Award, which will be presented annually to school aged youth who are working to make a difference in the lives of animals and changing perception of pit bull type dogs in their communities.

Our first ever recipient of the SCPBT Young Animal Advocate Award is 13-year old Tate Ludan of Vista, CA.Tate is an 7th grader at Vista Magnet Middle School whose Making Statistics Real project in her math class caught the attention of not only her teacher and classmates, but also SoCal Pitbull TEAM! As the proud owner of two pit bulls, Koi (who recently passed at age 17) and Cleo (pictured above), Tate chose to present her project titled, "The Misunderstood Pitbull."

Co-Founder Barb Telesmanic met with Tate and her Mom Kelly to present the award and ask our first Young Animal Advocate Award winner a few questions about herself:

Question 1: How long have you volunteered helping animals?
Answer: Since I was 3 years old, my family has taken me to donate items to the humane society. At nine years old I started my dog sitting business for friends and family called Camp Critters. The SD humane society featured me on their website because I donate a percentage or all of my pet sitting earnings to the humane society. Now at 13, I just recently started volunteering at the Gentle Barn in Santa Clarita.

Question 2: What do you want to be when you grow up?
Answer: I'd like to be a veterinarian and the owner of an animal sanctuary like the gentle barn.

Question 3: If you had three wishes what would they be?
Answer: To have endless money to donate to local shelters, to stop animal abuse, and to find homes for all the shelter dogs.

Question 4: What do you want the general public to know about pitbull type dogs?
Answer: That they rank higher then border collies, labs, and beagles on the American temperament test society testing. We think Tate rocks and encourage her to keep doing what she is doing, and to follow her dreams of working to benefit animals in need. If you know of a young person (under the age of 18) you feel deserves recognition for their work with animals and effort to end breed discrimination, please use our contact us form and one of our volunteers will be in touch with you to gather more info for next year's Award.

2017 Update:  Congratulations to Tate, who just graduated 8th grade, for being awarded the Vista Magnet Middle School IB "Caring" Award and was chosen as one of 6 (of 250) to present her year-long project on Breed Discriminatory Legislation at IB World night to families, students, and 5 city council members.